Phillips’s modern and contemporary sale, held at its Park Avenue headquarters in New York on Tuesday night, garnered $138.9 million with fees, though its hammer total of $115 million only barely surpassed the house’s $114 million presale expectation.

Despite a strong sell-through rate with only one of the 44 not finding a buyer, Phillips, along with its competitor Sotheby’s on Monday night, faced a road bump in maintaining the frenzied buying seen last week at Christie’s where that house generated $1.5 billion, an industry record, from the high-profile estate sale of Microsoft cofounder Paul Allen. Tuesday night’s sale at Phillips was also beset by a more causal tone than its larger counterparts, and the auction room was noticeably quieter by lot 40, with half of it emptying out. 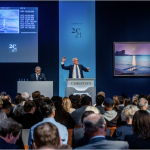 “The market feels more tentative,” New York collector Max Dolgicer told ARTnews following the auction, noting that the “exceptional” results for the Allen sale don’t reflect the “reality” of the market’s current temperature. “That leaves two possibilities, people are being more careful with their money or the estimates are too aggressive.”

He added, ”The market can’t go up forever.”

Tuesday evening’s results, however, are on par with the house’s equivalent sale in November 2021, which totaled $137.9 million.

Featuring a balance of work by blue-chip male artists, which held much of the sale’s financial weight, and auction newcomers with rising markets, like Lucy Bull and María Berrío, the sale’s top lot was Cy Twombly’s pink-and-red toned abstract canvas Bacchus (2005). Offered in the sale with a financial guarantee, the painting hammered on a bid of $36 million, just above its $35 million low estimate.

Third-party guarantees, or financial deals secured by the auction house with outside parties to ensure that a lot sells for a preset minimum price, represented around 41 percent of the sale, or 18 lots offered Tuesday night, including ones by Jean-Michael Basquiat, Cy Twombly, Mark Bradford, and Willem de Kooning. (Two lots, including one by Yves Klein, were withdrawn before the start of the sale.)

Another one of the night’s top lots, also carrying a guarantee, was Basquiat’s To Repel Ghosts (1985), a full-body portrait of artist Jack Walls, who is now based in Hudson, New York, but once was a fixture of New York’s Downtown scene. That painting hammered on a bid of $6.5 million, below its low estimate of $7 million; it sold to a bidder on the phone with Phillips deputy chairman Robert Manley.

Several works hammered at prices below their low estimates. Ranging from long-dead 20th-century juggernauts like René Magritte and Willem de Kooning to mid-career artists like Julie Mehretu and Mark Bradford, these works sold for final sums falling between $4 million to $7.4 million.

Two Yayoi Kusama paintings, one from 1960 and another from 2014, went to an art consultant Matthew Palentine, who described the sale’s atmosphere to ARTnews as “quieter” than expected. He scooped the two up for a cumulative $4 million (with fees).

But ushering in one of the night’s most energetic moments was bidding for the work by Berrío, a Bogotá-born, Brooklyn-based artist who is represented by Victoria Miro. Setting an auction record for the artist, He Loves Me, He Loves Me Not (2015), a florid scene in which three women appear to be floating on flower stems, attracted five bidders. After a protracted bidding battle that jumped between international specialists in London and New York, the work hammered on a bid of $1.3 million going to a buyer on the phone with Scott Nussbaum, Phillips’s senior international specialist of 20th century and contemporary art. The final sales price of $1.6 million (including fees) was more than triple its $500,000 estimate.

As engineered in sales hosted by Phillips, emerging artists attracted attention from international bidders. The sale’s early steady pace, which ultimately petered out as the sale progressed, was set by the opening lot: Ilana Savdie’s semi-abstract canvas Marimonda Desplegada (2020), made just two years ago. The painting, which draws on references to folklore of the artist’s native city of Barranquilla, Colombia, attracted swifts bids that brought its hammer price to $140,000, more than double its $50,000 low estimate. It sold for a final price of $176,000 (with fees).

Elsewhere, Lucy Bull’s horizontal green-toned abstraction Untitled (2019) saw four bidders vying for the work. After competition from clients represented by three Phillips specialists, the work hammered on a bid of $380,000, more than three times its low $100,000 estimate. It sold for a final price of $478,000, well below the artist’s current auction benchmark of $1.5 million set during a Phillips Hong Kong sale in June.